“There are three responses to a piece of design – yes, no, and wow! … Wow is the one to aim for”

Milton Glaser (born June 26, 1929) is an American graphic designer. His designs include the I ❤ NY logo, the psychedelic Bob Dylan poster, and the Brooklyn Brewery logo. His artwork has been featured in exhibits, and placed in permanent collections in many museums worldwide. Throughout his long career, he has designed many posters, publications and architectural designs. He has received many awards for his work, including the National Medal of the Arts award from President Barack Obama in 2009, and was the first graphic designer to receive this award.

“Digital design is like painting, except the paint never dries”

Neville Brody (born 23 April 1957) is an English graphic designer, typographer and art director. An alumnus of the London College of Communication and Hornsey College of Art, he is known for his work on The Face magazine (1981–1986), Arena magazine (1987–1990), as well as for designing record covers for artists such as Cabaret Voltaire, The Bongos, and Depeche Mode. His work is included in the permanent collection of the Museum of Modern Art (MoMA). He is the Dean of the School of Communication at the Royal College of Art, London.

“A person without imagination is like a teabag without hot water”

Alan Gerard Fletcher (27 September 1931 – 21 September 2006) was a British graphic designer. In his obituary, he was described by The Daily Telegraph as “the most highly regarded graphic designer of his generation, and probably one of the most prolific”. Much of his work is still in use: including his 1989 “V&A” logo for Victoria and Albert Museum, and his “IoD” logo for the Institute of Directors.

Paula Scher (born 1948) is a popular contemporary American graphic designer. She has worked relentlessly to revolutionise the graphic designing industry with her overzealous determination and creative work for over four decades. She is also a painter and an art educator, who became the first female to be offered the principal position at Pentagram in 1990s.

“The better people communicate, the greater will be the need for better typography – expressive typography.”

Most people recognise the name Herb Lubalin (17 March 1918 – 24 May 1981) in association with the typeface Avant Garde. And he was the typographer and designer behind its creation. But, his career spanned a much wider scope than that. One of the people behind the culture-shocking magazines Avant Garde, Eros and Fact, he was a constant boundary breaker on both a visual and social level and his ‘typographic puns’ have become widely regarded as some of the best examples of lateral thinking – simple yet brilliant.

“Never fall in love with an idea. They’re whores. If the one you’re with isn’t doing the job, there’s always, always, always another”

Charles “Chip“ Kidd (born 1964) is an American graphic designer, best known for his book covers. Based in New York city, Kidd has become one of the most famous book cover designers to date. Throughout his career, Kidd has been a graphic designer, book designer, editor, author, lecturer and musician. According to Graphic Design: American Two, he has been credited with “helping to spawn a revolution in the art of America book packaging in the last ten years.” 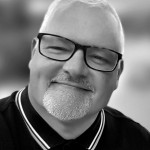